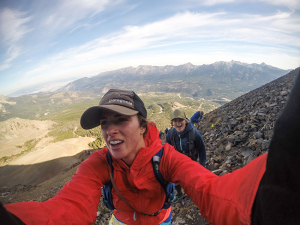 Most of my life I’ve been trying to keep up with the guys. I grew up with two older brothers who were bigger, faster, and stronger, so I think that’s where my mentality of “chase the men” began; I found myself wishing for their traits and doing everything I could to be just as strong as they were. And when I started really getting into climbing and backcountry skiing, it seemed like I could only find guys who would go with me, and teach me. And that wasn’t a bad thing, I think that men and women in the mountains are a fabulous thing; the love of my life, who is a man, taught me mostly everything I know and I have so much gratitude in my heart for that.

But that said, I’ve been getting out there with some powerful and badass women lately and it has really been amazing.. here’s why:

Because when you’re hangin’ with other chicks in the mountains, you no longer have the excuse of “being a girl.” You have to push it and be just as good as the strong ladies you chose to go out with that day. I don’t always try my hardest when I’m with a bunch of guys because I know I will never quite be as strong or as fast as them so I just work on pacing myself and staying safe. But when it’s all girls, we can be a little more competitive and push each other to do better. Women generally have similar struggles in the mountains (being short, small, less powerful) so it’s great to be around chicks and figure out how to get up a rock route or how to ski a line together. Celebrating and sharing the fantastic relationship and beauty of the way a women does things in the mountains. Whether it’s skiing, climbing, biking, or running, we just do things differently than the boys and it’s wonderful to share that. Guys just don’t giggle and shriek as much as us when they get to the top of a mountain. “Even though I don’t enjoy shopping and manicures, I’m still a girl and I get excited and giggly about things.” – Lila Scott 5. EPIC CONVERSATION
There’s nothing like getting together with a girlfriend and solving all the worlds problems while walking up a big hill. Also, connecting with other dirtbag ladies who love the outdoors is one of the greatest pleasures in life! 6. WE ALWAYS BRING THE BEST SNACKS Those womanly characteristics like: nurturing, care, consideration, and patience really come in handy in the mountains. At least with backcountry skiing, sometimes I feel like dudes race to the top. Women seem to be less worried about submitting and more worried about the group as a whole. I know that it takes me a long time to get into my groove and I usually start off slow, and having a fellow chick right there with me keeps me motivated and feeling strong even though I’m in the back of the pack.

We just can’t even contain ourselves. I have no explanation.